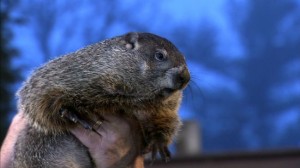 Groundhog Day is celebrated annually on February 2.  As folklore goes, if it is cloudy when a groundhog emerges from its hole on this day, Spring will come early; if it is sunny, the groundhog will see its shadow and scurry back into its burrow – with winter continuing for six more weeks. Ground zero for Groundhog Day is Punxsutawney, Pennsylvania – and the star of the show – a groundhog named Punxsutawney Phil.

It was widely reported last month that Phil saw his shadow at around 7:25 a.m. on the morning of February 2 in Punxsutawney, Pa., amidst overcast skies and temperatures in the mid-thirties –signifying that the worst of Winter was over, and warm, sunny Spring days would soon be at hand.

What has been less widely reported is that prognosticators are already looking ahead to Groundhog Day in 2015. Some are already predicting that on February 2, 2015, there will be no blue sky in Pennsylvania – and in the neighboring state Ohio. The prognosticators, however, are not weather forecasters – and the blue sky they say will be absent in 2015 is the “blue sky” that is regulated in many states by their state securities administrators – a state imposed merit review of securities offerings  typically undertaken  by smaller businesses.   The reason, they say, is a growing recognition by Congress, and now the U.S. Securities and Exchange Commission, that blue sky regulation by state securities administrators is a serious impediment to capital formation by small business – widely recognized as the major job engine of our economy and leading technology innovators. And if small businesses do not have unimpeded access to capital, they are unable to grow – and in many cases – survive.

What may be adding to the growing storm clouds in the Midwest is a proceeding instituted by the Ohio Securities Commission against SoMoLend, a company formed to provide loans to small, local businesses in Ohio. SoMoLend recently shuttered their business in response to the Ohio proceeding, resulting in a total loss to SoMoLend’s investors. And for small Ohio businesses, this meant that a much needed source of capital would be no more. Though SoMoLend has settled up with state regulators, the proceeding is continuing against its founder and former CEO, Candace Klein, a securities attorney by training, alleging violations by SoMoLend and Ms. Klein of Ohio state securities laws governing the offer and sale of securities in Ohio – SoMoLend’s securities.

What is odd about this proceeding is that there are no victims – at least in terms of SoMoLend investors. Instead the only people harmed by these alleged activities appear to be the SoMoLend investors, who have railed against the Ohio proceeding – but to no avail.  This is leading some observers to suggest that perhaps the Ohio Securities Commission has already shot itself in the foot by instituting these proceedings – by exercising its discretion in this proceeding in the name of investor protection – at a time when there is a raging debate in Washington, D.C. to eliminate blue sky regulation.  Specifically, the U.S. Securities and Exchange Commission is currently considering the adoption of proposed rules to eliminate blue sky regulation for small businesses seeking to raise up to $50 million in a “mini-IPO” registered with the SEC – popularly known as Regulation A+.  And the State of Ohio, through Andrea Seidt, who is both Ohio’s Securities Commissioner and President of NASAA (the North American Securities Administrators Association), is forcefully leading the charge against these proposed SEC rules – suggesting that the proposed rulemaking by the SEC exceeds the authority granted to it under landmark federal legislation, the JOBS Act of 2012.

Ironically, the remaining defendant, Candace Klein, was an active and vocal proponent of the JOBS Act legislation, both before and after its passage by Congress. Of course, NASAA strongly lobbied against a number of provisions this legislation, including those provisions which removed the power of the states to deny unaccredited investors the ability to invest in smaller, risking business ventures.

How this will all play out in Washington, D.C. in the coming weeks and months in the battle between state securities regulators and the SEC remains to be seen.  But one thing is for sure – at least judging from afar – NASAA’s President seems to have gotten off on the wrong foot in the battle shaping up in Washington, D.C. – which has some observers predicting that there will be no “blue sky” next year on February 2, when Punxsutawney Phil emerges from his burrow – meaning sunny days ahead for small business.

For more on this, please read my article published today in Crowdfund Insider.